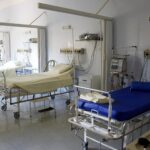 In the Corona pandemic, public discussions are being raised asking whether it is appropriate to close more hospitals. In 2018, 1925 hospitals were still counted across Germany. This means that a total of 158 hospitals have been closed since 2008. The of bed capacity has declined to 498,400 beds for 20 years. This is a reduction of approximately 10 percent. In view of the dramatic state of affairs with regard to the lack of nursing staff, it must be asked how a proper quality of care is to be guaranteed here in the future, whether in acute cases or for longer-term illness. As of December 2019, Germany has a shortage of approximately 50,000 caregivers.

The Institut der deutschen Wirtschaft im forecasts that there will be a shortage of around 305,000 nursing staff for inpatient care by 2035. This shortfall could increase to almost 500,000 skilled workers in Germany by 2060. According to care statistics, the number of people in need of care rose to 3400 people 3.4 million people in 2017. By the year since 2060, statisticians expect a figure of circa 4.5 million people in need of care.

Number of hospital beds not decisive

Where will the nursing staff come from?

The concerted action on nursing in the political arena in Germany has initiated various measures to counter the shortage of suitably qualified personnel. Here, too, solutions of an international nature are conceivable. Oliwer Mikus: “Well-trained nursing staff are available in Eastern Europe. Here, the age structure is different. The level of education is high, we help in terms of language skills and integration and thus give young committed people the opportunity to spend a few years abroad, for example in Germany. The nursing staff we place, whether nurses or other medical professionals, enjoy a good reputation. The statistics prove us right.”

According to current figures, however, Germany is falling behind in the competition for international talent. This is in contradiction to the declared goal of the Federal Republic of Germany, through business and politics, to maintain the further development and expansion of the economy through appropriate skilled workers. Even if one takes note of the Corona pandemic as a minor event, a long-term trend is overlaid by it, as has become known from a recent study by the StepStone company. One such long-term trend is the aging of the population in Europe and especially in Germany; there is a shortage of young people everywhere to replace the baby boomers soon to retire from the generation born between 1960 and 1970. With almost all major economies suffering from a shortage of skilled workers, a demand market has emerged in which societies compete to recruit young talent in the international labor market. In recent years, Germany has been very successful in competing for top talent, but the German economy is falling behind. For example, the Boston Consulting Group, the company StepStone and the career network The Network launched a major survey some time ago. More than 200,000 employees from 190 countries were interviewed as part of the study. The study revealed which nations are rising or falling in prestige as a place of desire. The good news first. For Europe, Germany is named most often by foreign professionals; the country in the center of Europe is easily accessible. If you ask more specifically about cities, Berlin is named ahead of Munich and Hamburg. “There are about 500,000 people from Poland working in Germany, of which 450,000 live directly in Germany and 50,000 commute daily. It is better that we face the open care market and fight the shadow economy in this area. It is a political goal to make use of the freedom of movement introduced by the European Union. Friendship between peoples is ultimately created through exchange and not through separation,” concludes Oliwer Mikus.

Personnel consultant and honorary lecturer Dr. Rainer Schreiber with a degree in economics, specializing in finance, controlling, human resources and training. He works in professional adult education and publishes on the topic of personnel consulting, demographic change and economic policy.

The company Sedulus Sp. z o.o. with headquarters in Opole / Poland, branch in Rzeszów/ Poland and a branch in Munich / Germany has been successfully operating in the recruitment of experienced forces since 2015 and sees itself as an interface between employers and applicants. The goal is to achieve the connection of the needs of employers with the requirements of employees. Sedulus Sp. z o.o. has numerous attractive job offers, both permanent and temporary jobs. The company specializes in organizing suitable work for individuals, couples and groups, as well as students. More information at: https://sedulus.pl/de/kontakt-deutsch/